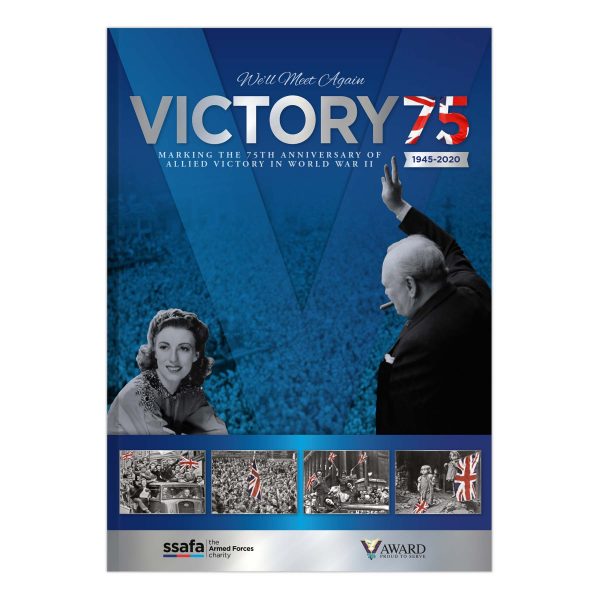 SSAFA – the Armed Forces charity is excited to offer friends and supporters the opportunity to purchase Victory75: We’ll Meet Again – a 140 page, full-colour album chronicling Britain’s road from defeat to victory in a conflict which threatened the future of freedom in this country.

SSAFA – the Armed Forces charity is excited to offer friends and supporters the opportunity to purchase Victory75: We’ll Meet Again – a 140 page, full-colour album chronicling Britain’s road from defeat to victory in a conflict which threatened the future of freedom in this country.

Topping the bill of writers is Dame Vera Lynn, whose songs spoke of love, sadness and hope, chiming with millions on both the home and battlefronts.

“We’ll Meet Again” became an anthem of the war years, and has become so again in the current national emergency with Dame Vera and Katherine Jenkins recently taking it to the top of the charts – helped in no small way by Her Majesty the Queen invoking its spirit and meaning in her address to the Nation in the national emergency.

Reflecting on all the sailors, soldiers and flyers Dame Vera saw leaving for war she writes “in my heart I still sing for them”.
Victory75: We’ll Meet Again also features an article by Prime Minister Boris Johnson who writes that “at the stroke of 11am on 8 May 19 church bells rang out across Britain…our debt to those who were present at that moment – surely the greatest generation of Britons who ever lived – can be simply expressed.

“Without their valour and sacrifice, all that is good and right would have perished from the earth”.

Vera Lynn and the Prime Minister are joined by tributes from the Heads of the Navy, Army and Air Force, as well as the Lord Lieutenants of Guernsey and Jersey, respectively HE Vice Admiral Sir Ian Corder and HE Air Chief Marshal Sir Stephen Dalton who tell the story of the Nazi occupation of the Channels, paying tribute to the fortitude of the local population.

Victory75: We’ll Meet Again chronicles the greatest conflict in the history of mankind from its roots in the inter-war period through six long years of struggle on both the home and battle fronts under the inspirational leadership of Winston Churchill – one the greatest wartime Prime Ministers the world has ever known.

The Album is a tribute to courage and sacrifice and marks the moment 75 years ago when victory was finally secured by a people, and its Allies, who had suffered so mightily.

SSAFA is privileged to be still caring for some of those who played their part in that struggle, amongst the 80,000-plus it supports each year.

And funds from the sale of Victory75: We’ll Meet Again will play an important role in helping SSAFA’s work – at a time when the coronavirus crisis is badly hitting charity sector revenue.

So, be part of this year’s Victory commemorations and celebrations by purchasing this superb souvenir publication which evokes the spirit of 75 years ago, as well as now – We’ll Meet Again.

Thank you for your support.